Official opening of the anchor of the “Joan of Arc” former helicopter-carrying Navy.
The jeanne ended his career in June 2010 after 46 years of loyal service worldwide. Rouen, godmother, wanted to keep one of these anchors: A room of choice because it does not weigh less than six tonnes, while its chain mooring shows a ton on the scale!
The anchor was installed November 27, 2012 on the tip of the Ile Lacroix. 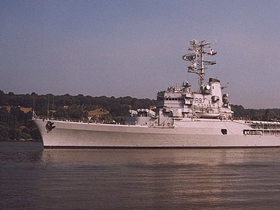