Winner of the 276 Talents Contest For The Hackers is a group of Indie Pop born January 6, 2010 the Dieppe area consisting of:
Arthur Council on drums / choir
Alex Gal at low
Romain Lucas on guitar / choir
Axel Legrout vocals / guitar
All songwriters, these four fans share for the first time on stage their music June 18, 2010. Hackers For The (formerly The Hackers and Hackers The 4) therefore consists in a colorful spirit, rhythmic melodies and dance rock, indie and sexy and texts in the language of Molière and Shakespeare. 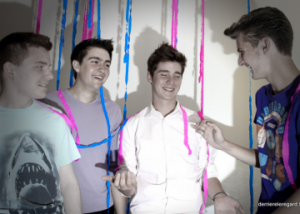